Some not terrible things

(Call weekend! You know the drill - I rant. Sorry.)

Whenever Simon is on call (why is it called "on call" when he's at the hospital the entire time and is rarely able to sleep for more than one 30 minute feline nap? - because all things related to residency make absolutely no sense) after a little bit of time not being on call we generally get into a small to medium fight/spat/tiff. We just do. Whether it's related to a failed attempt at visiting or Grace just being her crazy self it generally happens ... I just didn't expect it to flap its petty wings and fly at 7:45 this morning. It did and it's over but in the middle of my fuming and all three kids waking up in their special moods reserved for when Simon isn't here to help I realized the stupid internet wasn't working. Judge away but a call weekend without internet just won't fly. I have to sleep with Hulu blaring and I really rely on Netflix as my babysitter when I'm busy brooding over petty fights or need to do something without Julia demanding a hug and a kiss (her new thing when she senses I just might be being productive).

So, I called (hate calling but going online wasn't going to work even though I tried) the place and dealt with the she-robot voice for awhile before she started spewing her, "I'm sorry, I didn't quite get that" in response to my barks at the kids for I don't remember - they were being bad - trust me. So finally after persistently demanding, "talk to an agent, TALK to an agent, TALK TO AN AGENT" I eventually talked to a human who saw me through my crisis and as politely as possible observed that I sounded somewhat frustrated and that he was very sorry. Bless him and shame on me.

Anyway, in the midst of unplugging routers and shutting down the computer and plugging the modem back in and making a bottle for Theo WHILE carrying Princess J around I heard a very bad sounding splat and saw this ... 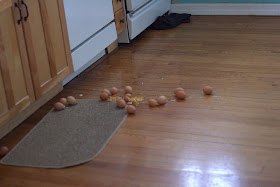 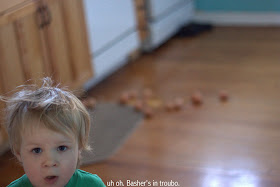 Yes, he is but not right now because I'm trying to talk to this patient man that is probably about to drive out here and throttle me if I say, "um ... which one is the modem again?" one more time.

Also, not pictured are the two eggs that Bash managed to squirrel away and suck down because he is disgusting. Anyway ... that was an introduction (brought to you by my friend brevity) to my short list of semi-sweets because one day maybe I'll graduate to embracing the power of positive thinking. 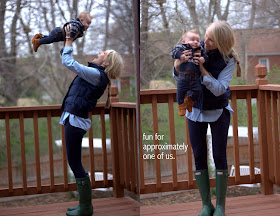 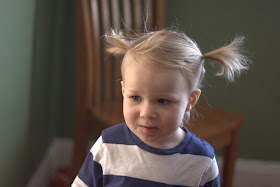 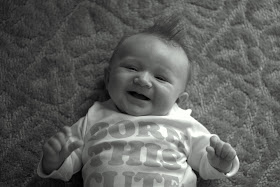 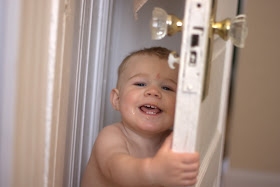 1. (small) Run: I finally womaned up and took the kids out in the triple jogger alone on an actual run this morning because the weather was finally not reminiscent of Santa's backyard. I couldn't even make it up the hill I used to conquer when I was in my first gag-heavy trimester with Theo and he is now 3.5 months old but ... a millimeter of progress at a time.

2. Theodore Augustine: The other night Theo would not sleep. I got in bed 5-6 times in a row thinking he was all tucked in and ready to rock a goodnight but no. I was frustrated but it dawned on me how good of a bebe he normally is because that sort of thing hasn't happened for a long time. I should probably thank him.

3. Julia's hair: When it's down it's a messy nest of, "why do you keep her hair short?" but when she requests "veggie tails" she almost looks like a normal female toddler whose mother hasn't butchered her locks 4 too many times.

4. the buck stopped at the eggs: I think Sebastian sensed that he had crossed the invisible line of doom with the egg toss and held it together in the disaster department for the rest of the day. He spilled a full cup of water all over himself at the hospital while visiting Simon but .... his problem. Well, he also bit Julia's leg this morning and tonight when I put her pajams on the teeth marks were still very visible but .... her problem.

6. The weather. I went there. Seasonal Affective Whatever - it affects me and it was gorgeous today. If it snows again Simon and I might need to discuss a long distance marriage and he can visit me and the kids in our new found home: tropical climate.

7. Music: I know it's all over the radio but I still love this.

8. Trickery: Our SUPER DUPER chatty neighbor sensed that I was about to take the trash out so he parked himself in front of our house just as I walked outside this afternoon so I just walked back in through the back door because -- we love you Gene but nap time could not be delayed 34 minutes while we discussed lawn weeds again.

Fiddlesticks. I really thought I could come up with ten things but apparently you can't blog yourself into being an optimist.

Next time! With rose colored spectacles on emoticons and all.