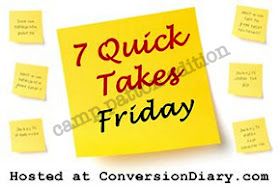 Welcome Quick Givers! I'm thrilled you're here but really wish our usual hostess Jen was home with all six of her kiddos and not suffering through day after day with sweet JT in the NICU. I won't pretend to know what she's going through but judging by the time stamps of some of her emails she isn't getting much sleep and could probably use any prayers you're willing to spare the next several days. Also, if anyone knows of any Margarita delivery services, let me know because I think she could use ten or more.

I'm sure you're all familiar with 7 Quick Takes Friday but in the highly unlikely event that you aren't ... Jen hosts a weekly link-up of posts containing 7 quick takes. There doesn't need to be a cohesive theme and they can be as fast or rambly as you like. It's always fun reading Jen's takes because she always delivers in the interesting and hilarious departments. I apologize in advance as your guest host because I think I'll be flying in the stale and "why does she think she needed to share that?" realms. Hold on tight - I don't want to lose you.

1.
The older two kids have been infected with some sort of plague that seems to have only affected the contents of their diapers. I'm counting my blessings that it isn't a plague of the vommy variety but I do hope and pray it sends soon. With that said - Julia took it upon herself to try and change her own diaper tonight and Sebastian took it upon himself to get a permanent whiff by way of diaper contents on nose. It was definitely one of the finer moments for all parties involved - especially the parents. Simon is currently dealing with the aftermath but not without consulting our favorite parenting expert ... 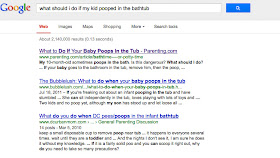 I think we might look into teaching parenting classes someday soon because we really scream, "veterans".

2.
You've had enough potty talk? I didn't think so. I've come to the realization that there are an alarming number of children that are months and months younger than Julia that are completely and totally potty trained. I started reading OH CRAP! Potty Training last night and the author kept harping on the fact that 20-30 months was the ideal age to do the deed. Beyond 30 months would bring a whole slew of awful but I didn't think that applied to us because let me count on my fingers here ... 26, 27, 28, 29, OH CRAP is right. She turned 30 months (why does that sound older than 12 years old or something?) last month so basically I'm doomed and she's going to have issues for the rest of her days. Don't worry, I have big plans to stop typing about training and just doing it ... very soon.

3.
I crossed the line from safe distance stalker to creepy close breather and G-chatted Jones earlier today. I needed her input on NBC's take on The Bachelor ... Ready for Love. I'm scared I'm going to get emotionally invested (too late) and was hoping she'd done the same but she's sensible and she hadn't so we talked about important stuff like how Trader Joe's and Whole Foods sends our eyes into roll mode. I took things one step too far and started hating on the consummate Whole Foods footwear ... TOMS to which she responded that she was wearing a pair.

So here's an accurate description of Grace's side of the screen + longer locks tied in a greasy knot ...

4.
Wow. There are some insanely crafty Camp readers out yonder. Thanks so much for all of your input on yesterday's kitchen post. Look! at this kitchen transformation ... and where was I when they were handing out the crafty genes? Also, a dresser in the kitchen! I love it.

5. & 6.
Angie emailed last week curious if I was going to do a clickables post anytime soon. I will! But in the mean time let me tell you about two of my favorite new blogs ...

I. Team Boda I love reconnecting with old friends via the blogging verld. I knew Kristin at Franciscan way back in thuh day. She was the super intimidating and super in shape aerobics (fitness? It was 2001 .... aerobics still worked) class teacher that was really nice to my lowly freshman self. She has four gorgeous kids and a hilarious husband that writes awesome posts on Sundays. She lives in Florida and I try not to hate her for it which is easy when she writes gems like she did yesterday. Go forth and follow.

II. Best Daze of My Life Mariann is another FUS alum but unfortunately I didn't have the pleasure of knowing her when we were at school together but I wish that I had because her blog oozes wit and hilarity. 99% of the blogs I read are written by moms and I love them all but it's nice to venture outside my comfort zone for a few minutes every day to enjoy Mariann's writing and adventures from Annapolis.

7.
How did I get through the first six takes without posting 99 photos of my offspring? A lot (fine, one or maybe two) people asked what happened to Sebastian's forehead ... 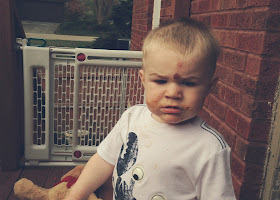 here's a cute and smiley picture of peanut butter and Basher.

I didn't see what happened exactly but I think he flipped over the front of a bikey type ride toy in Charleston and ate a bit of cement. He was fine a few seconds later whereas Julia and I would probably still be crying if we'd been the clumsy victims. The Costco employee helping us tonight thought he had some sample food on his face and after he had patiently listened to Julia explain all about her brothers Fee-oh and Basher and Fee-oh I just let it slide because I thought he'd probably suffered enough female Patton for the evening.


7.5
I had just finished reading Michele's post when I checked my email and she had sent the following:
I have a really urgent prayer request and I'm trying to get the word out to as many people as possible,

This mom and her baby need urgent prayers. I went to college with her and husband and they are just a really amazing family and they're in a really tough place with their youngest son. He has a whole host of serious symptoms and they have no idea what's wrong with him. He's been in and out of the ER and the PICU tons of times and has been seen by a number of specialists all who have no idea what's wrong or how to treat him. 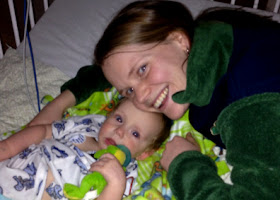 His special patron saint is St. Andre Bessette who's a pretty awesome saint in his own right. I'm sure Baby A's mama would love to to have people implore St. Andre's intercession!
Thanks in advance for any prayers you're able to offer for them!


Thanks for letting me host, Jen! And thanks to all you linkers and readers for putting up with me, you're the best.