(I always say Home Depot ... learn something new every month!)

I know! Sponsored posts have ugly reputations ... but the beauty of blogs is that you don't ever have to read a single post if you don't want to! But ... I would love your input here because you all generally have rock solid advice for Clueless Patton.

Way back 1.7 years ago when we lived in Wichita we rented the cutest house with an abnormally large kitchen. It had everything we didn't need ... an island with space for two stools (why did I want to say little benches?), an appliance garage (first I'd ever ever heard of those), special cabinets for cookie sheets, a huge pantry with roll out drawers (as opposed to drawers that don't roll), and TONS and tons and tons of storage. I looked in my photo folder from the summer of 2010 and found some evidence of the grandeur ... 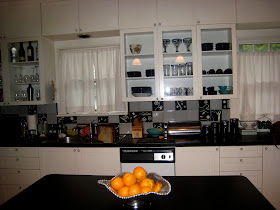 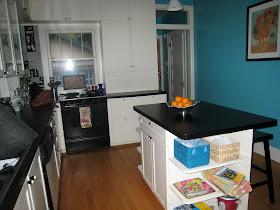 the wall color was a little loud but apparently we loved it because the first thing we did when we moved into our house in Saint Louis was paint (ahem ... Simon's parents painted) the kitchen almost the exact same screamer ... 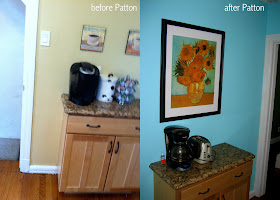 (we also upgraded from a Keurig to a Mr. Coffee and let the previous owners keep their original caffeinated artwork)


So! Now we're working with this kitchen situation ... 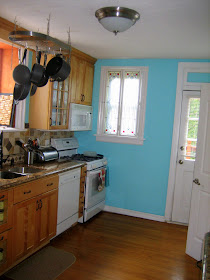 and let's not forget my favorite detail ... 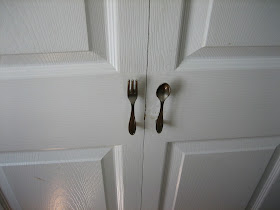 really wish I'd have met the previous owners ... I'd love to get a play-by-play of the conversation that determined this decision.

Anyway, I love our kitchen but I have to be honest in admitting that a great majority of our stuff is still downstairs in the storage room because we have no place to put it. I was REALLY excited when I saw that the contraption to hang pots and pans from was left because that has saved us a ton of space but other than that I just cram stuff in the super shallow cabinets and let Sebastian reorganize when the spirits moves him which is every single hour. Also, those leeeedle tiny drawers in between the dishwasher and the oven? What are they for? Foil and .... spaghetti noodles?

Do any of you have an island or a butcher block in a small kitchen? Or did you get creative and gut an old dresser for more shelf space? I'd go searching on Pinterest but .... I get overwhelmed one pin in and after six seconds I tend to click over to the humor pins because me + DIY = ugly.

Thanks for reading and thanks for helping!

(and triple thanks for all the dinner ideas over on the Facebook page ... I have no more "can you just grab a little something from the cafeteria?" excuses. None.)