1. I have this teeny tiny sliver of time where Julia and Bosco are playing happily and everyone else is asleep so I'm going to try to pound these out. Super SUPER quick. We'll start with my omnipresent shadow (redundant much, Patton?) ... 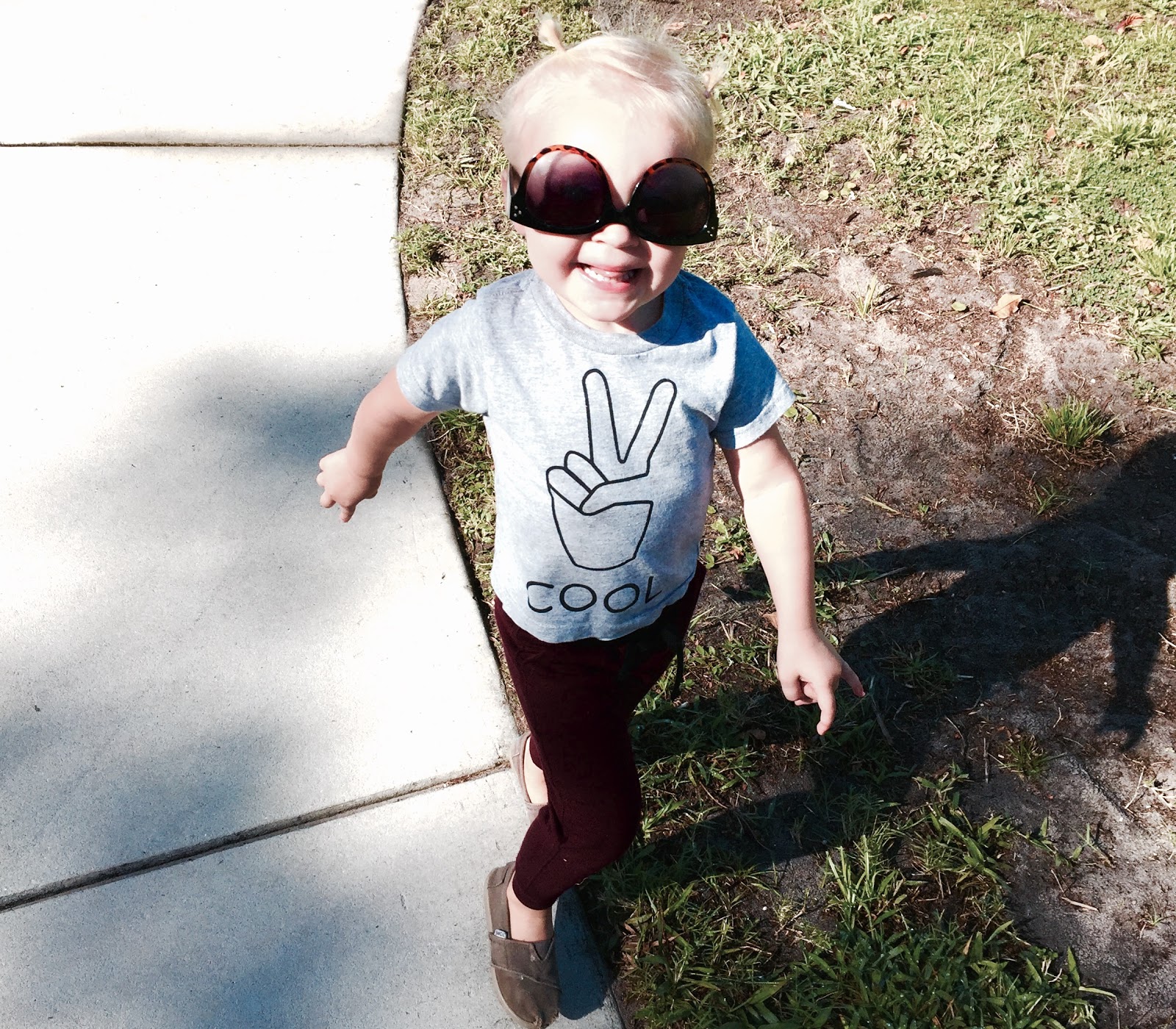 ... she went through a mercifully brief phase of acting as though her eyes were on fire if she wasn't wearing sunglasses - upside down - when we went outside. Phase over, for now.

She's surprised me the most during my Whole30 and devours almost all the veggies I make for myself. But we allll know that if I made the exact spread for her she'd spew, "too gross" ... and not touch it. Kids these days.

2. Moving onto to something super sexy: the weather. Today is the first day that I felt truly justified in pulling out the cardigans and sweatshirts and the kids still complained they were freezing in the Target parking garage this morning so I checked the temp: 68. We are officially wimps. The wimpiest.

3. Thank you so much for all your feedback on my ankle boot conundrum! I think it was pretty much split (between the zippers and the cutouts) but I got some um - what are the cushiony pads you can stick on the heel of your shoe? Heel pads? Well, I got those and that significantly helped the comfort issue with the cut-outs so I kept those. But THEN I saw that the ultimate compromise boots boots are back in stock and on sale. The comfort of Lucky and the fun of the cutout. Of course. Of course!

4. I'm sure you all read Jessica's blog but I had to link to the great minivan post she wrote - she let me contribute a little blip because she's the best. Head on over if you haven't already!

5. After reading about everyone under the sun being obsessed with Poldark, Simon and I started it on Thursday night and are only two episodes in and so far? So good. Simon's only said, "so ... people ... like this?" a couple of times but I can see myself getting hooked. The horse racing along the water's edge montages seem a little frequent and I thought it was funny that the girl he took in went from looking quite non-descript to a gorgeous young woman after a mere hair wash but -- details, DETAILS. We'll keep on watching.

6. I know I already put it on Instagram but I went with my friend Kristin to Emily Ley's book signing on Thursday night and it was so fun. We both entered a raffle to win a Kate Spade bag (because it was at a Kate Spade store) and they just called to tell me that I won. Party emoji central. I feel so fancy already and I haven't even touched the bag.

7. I admitted temporary defeat on Truly Madly Guilty because even listening at double speed I still have 10+ hours to go and it feels like I'm watching molasses drip into a bowl of .... more molasses. I listened to The Singles Game to give myself a breather and it was a lot zippier and I had no expectations and really enjoyed. I'm going to trudge on and find out what on earth went down at the damn barbeque if it kills me.

Off to iron some letters onto some shirts - Simon and I are going as the lamest couples costume ever to a costume party tonight --- maybe I'll show you and maybe I won't. Costume creativity is just not one of our strong suits.