(if you're pressed for time you can watch a quick video version of the story right on over HERE.)

Remember how there was a little rumble a year or so ago about how moms need to get in photos with their kids? I don't have that problem. At all. I manage just fine in that department. I think the problem is getting photos of the entire family or of me and Simon together. 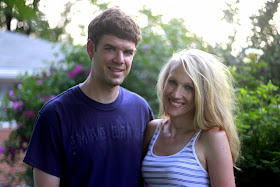 Simon's sister snapped some photos of us last night and it spurred me to click clack this out. I'm sorry.

The story of how Simace came to be.

Simon and I had met twice before we met met in November of 2007 at a Notre Dame football game in South Bend. Once at my baptism as his parents are my godparents although he was still safely on the other side of the uterus and once when we were both 11 or 12. I stayed at his parents house for the night in Wichita before trotting off with some friends to a camp that Simon's mom had organized. Our moms went to high school together and then all four of our parents went to college together (Rock Chalk) and converted to Catholicism through the same humanities program. I grew up in New Mexico and Simon grew up in Kansas. I feel like I'm typing this as though I'm 97 and reminiscing about the good old days with a far off look in my eye whilst rocking slowly on my porch in my calico dress complete with lace collar and tightly wound bun with a glass of sweating fresh squeezed lemonade in my shaky hand. I'll try to be less ... that.

So .. the year was 2007. Simon was in his first semester of med school at KU after graduating from Notre Dame and spending a year in Puerto Rico volunteering at a shower facility for homeless men ... 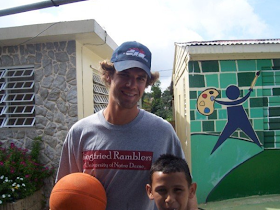 ... I think he also occasionally went and helped at a local school. Facebook didn't tell me but he is off the clock here, I'm pretty sure.

I had been living in DC after graduating from Franciscan and had gone through a fun little series of nanny - > unpaid Hill intern -> barely paid staff assistant which is where I was sitting when I opened the Facebook message that Simon had sent much earlier that day around 1 in the am. It happened to be my parents wedding anniversary which is really insignificant but still - neat? Our parents had recently seen each other at a college reunion and my dad made an off handed remark asking, "when are we going to get Simon and Grace together?" and Simon's parents had relayed the message to Simon who took that to mean I was single (correct but let's add 'and ready to MiNgLe' there) and so ... Facebook message.

It was a witty message casually asking how I'd been "these last 23 years" and before responding I whipped through all of the photos he was tagged in and decided that he was not a bad looking human. Not a bad looking human at all. And that makes me sound shallow. He was also hilarious. Really hilarious. As the week went on we sent messages back and forth and I was caught off guard by how disappointed I was when I'd check Facebook to no messages. We somehow graduated to email and eventually talked on the phone one night. He was in the middle of studying (sober) and I had just come home from being out and about (not 100% sober). He didn't write me off completely although I wouldn't have blamed him if he did as I'm sure I was anything but polite or even a little bit polite.

But ....... but but but but. Always a but. And before you judge me too harshly .. let me type the whole paragraph!! I had been talking on the phone to a Notre Dame law student whom I'd met twice that summer in DC. I was really surprised when he offered to fly me out for a football game in November but I didn't decline. It didn't take long for Simon and I to realize that we were both going to be in South Bend for the same game. What? Aligned stars and all that tap dancing. It was decided that I would stay in the dorm with Simon's sister Mary and it was one of the most fun weekends ever. I was almost too nervous to even look at Simon when we first met up in the library lobby (I'm sure there's a fancier name for that because that campus ... it is fancy) but once we set out on the grass and started chatting in a group setting everything went just swell as hell from there. It was funny finally seeing someone in the flesh after so many emails and a few phone calls over the course of the past two weeks but a good kind of awkward funny. I know you know.

We went out late later that night and I think at one point I forced him to make a tunnel for people to duck under out at a bar and I think he thought I was insane/15 years of age in the maturity department but ... he overlooked my crazy for the time being. 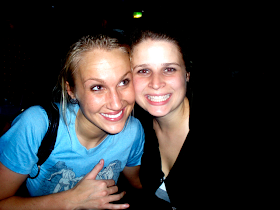 Mary and Grace. Deep into some plastic pitchers of Red Bull + quality vodka ...

Law Student had to be studying a lot and we hung out a fair amount but he ended up telling me as he drove me to the airport on Sunday morning that he wasn't interested. I wasn't surprised because I was surprised he'd started calling me in the first place but still ... it was still a 1 zillion on the awkward meter ...

Simon wasn't a big texter (he didn't even have a texting plan when we first met -- which quickly changed because I'm a big fat corrupter) so when he texted, "have a safe flight" on Sunday morning after the most fun weekend EVER I read into it WAY too much. I don't even think he knows that - now he shall. Have a safe flight??? Classic boy/girl difference - the girl being ridiculous and the freak out lasted mere hours before we started emailing with a renewed sense of familiarity later that night.

We continued with the emails and the gchats and the phone calls. The phone calls that went on for so many hours night after night that I burned straight through my Razr battery ... toasted it GOOD and I was forced to buy a bigger bulky "junk in my cellular's" trunk battery so that we could keep the flame alive. We talked about everything under the moon and I remember Simon brought up the future one night regarding where he'd practice medicine and said something along the lines of "it will be up to you, too" and my heart skipped 89 beats because ..... what? We were obviously more than friends but were we? Nothing romantic had ever been broached and I was living in DC and he still had a little over 3.5 years of med school left in Kansas so ... what was going to happen?

So ... we made plans to meet up in Chicago for New Years as he had friends there and my best friend, Jessica lived there and wouldn't it all be too perfect? Of course we were careful to not make any ACTUAL plans on New Year's Eve together because wouldn't that be ridiculous? Two people that talked on the phone for 2-4 hours every single night for 2 months straight ..... never. It was all very middle school and civilized and I miss the hilarity of it all.

We were there on a Sunday so we went to Mass together and right after Mass we were in the back poking around and waiting for Jessica to pick us up he asked if I'd like to go on a date later in the week in DC (he had planned to visit some friends and I didn't complain about that plan one bit). Like a real live official date. I had to act the perfect amount of enthused but poised but wanted to give 99 enthusiastically shouted affirmatives in his direction. I think I landed somewhere in the middle. We went out with Jessica and Reed the couple of nights before NYE and dance dance danced (where Simon told me how much he hated my fingerless gloves - the most practical invention of all time) and took nice photos like dees ... 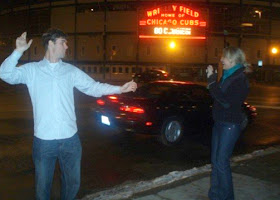 I typed this story once before and Jessica got on me for not including important first kiss deets and about how she pulled Simon and Reed (her now husband, then boyfriend) into the bathroom at Simon's friend's apartment where we met up AFTER midnight on NYE (of course) and told him that I had dated a lot of guys in the past and that he was BY FAR the best one. Thanks Jess!! I don't blame you - I blame the alcohol. Anyway ... before we cabbed it back to Jessica's Simon made the first kiss move in the tiny apartment kitchen and should I make the cliched fireworks joke? No, I won't but it wasn't awful.

And now she's all over me again for not including the part about how we walked two miles in the snow just to see Simon. Well - that is an exaggeration but we did lock ourselves out of her apartment (ahem ... she was the tenant so she locked us out, technically) and Reed had an extra set of keys at work .... a mile or so down the road. But this was December 31st in Chicago and it was snowing very hard and we were wearing very high heels so .... labor of loved it down and back to the apartment to continue getting ready to the tune of Britney Spears. I'm not kidding and Jessica was kind to let me choose the beats.

ANYWAY ... I returned to my post in DC and Simon followed a few days later in a car with some friends. And this is when we went on our first official real live date.

I think that's enough for today. I swear I won't make this a zillion parter. Blogger's honor.